Based on the discussion in Donal’s thread Market Analysis and deti’s points, I went back over the statistics from the previous post. I found a few errors that I made, so I’m correcting them in this updated post. Let’s get into it.

In the previous post on a woman’s sexual partners and divorce risk, we found out that approximately 5% of women were virgins when they were married in 2010. I noted that I wanted to go back and do a ‘better’ statistical analysis that is less confounded than previously in Doom and gloom and the amount of attractive Christian virgins.

2010 Census Data. Not much changes in 5 years given the chart as each population group is still roughly 10 million. http://www.census.gov/prod/cen2010/briefs/c2010br-03.pdf

These two factors as pointed out are heavily confounded with each other. As KPP pointed out in the previous comments, about half of the 2/3 that drop out eventually end up attending again albeit in lower frequency. For the sake of argument, I’m willing to be factor out the dropout rate of young adults altogether using the US population “regularly attenders” as the standard which is 17.7%. This will overestimate the amount of young women in the Church.

One could say that Christians have more self control than their counterparts. However, as I have noted in posts such as A lesson in false humility: Christians are allergic to healthy lifestyles, Christian women tend to find a way to rationalize that paying attention to physical appearance is an idol. This statistic is probably pretty accurate.

Therefore, a solid estimate is that 50% of 18-29 age range are not overweight or obese. That’s still pretty dismal.

I did some research since the previous post, and found the actual study with data: 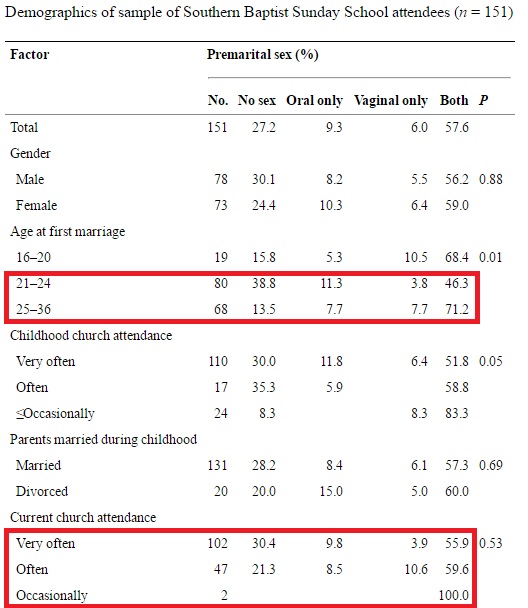 A greater percentage of men had no sex (30.1%) compared to women (24.4%). Same with the data for oral only, vaginal only, and both. The distinction is fairly low, but it seems to support the conclusion that women slightly more often have premarital sex than men.

Overall, the more committed one was to Church (e.g. very often) the more likely that one was a full virgin. Unfortunately, the study did not quantify the difference between “very often” and “often” but I imagine that “very often” is likely 1 or more times per week, whereas “often” is only once to a few times month. That’s the way I’ve seen it quantified in online dating surveys.

Indeed, there was also a huge disparity between those who married 16-20 and 21-24 and 25-36 with the rates at 15.8% (includes married by pre-marital pregnancy), 38.8% and 13.5% respectively for no sex before marriage. Overall, if you’re a Christian man aim for the 21-24 age group of Christian women attending Church often for your best shot. 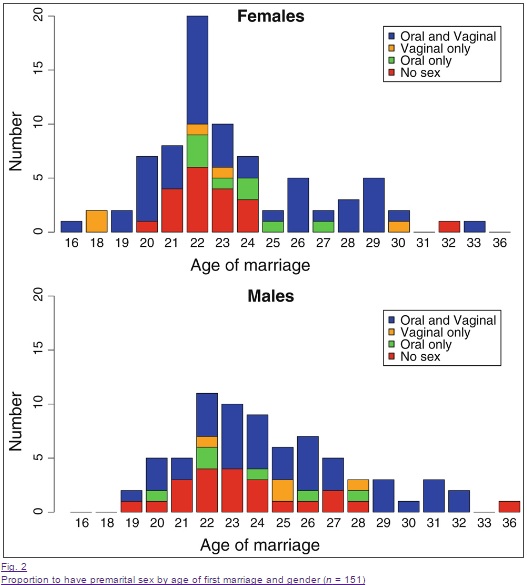 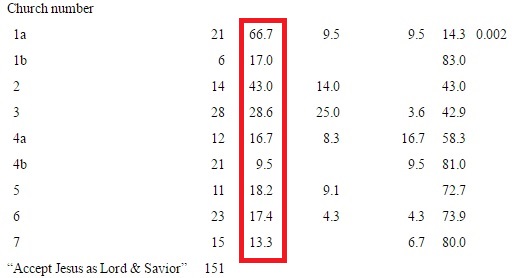 It’s worth noting that Church 1a and 2 had a highly disproportionate number of virgins at marriage compared to the rest of the Churches surveyed. 1a and 1b are designated as being in the “same region” so there’s obviously a drastic difference between Church 1a and Church 1b even though they’re in the same area. FIND THE RIGHT CHURCH.

For the sake of the statistical analysis, I’m going to go with the 30.4% for “very often” Church attenders for the conclusion as the “attend Church regularly” is already a factor. Note that this may be higher in the 21-24 age women population and less in the 25-29 age population.

Shouldn’t you separate the single women in this age range from the partnered women before doing the rest of the sums? (I’m quite tired today, so the answer to this may be staring me in the face).

That is indeed the case. Therefore, adding a significant needed criteria this would be:

Thus, I believe the above statistics are a fairly accurate measurement compared to the previous estimate. If anything, it’s going to be a slight to moderate overestimate.

Specifically, in any random Church the percentage that you’ll find a 18-29 old with the attributes of non-overweight or obese and virginity is going to be .24 (virginity at marriage) * .415 (not overweight or obese) = 9.96%. In other words, about 1 in 10.

These numbers are better than previous estimates, based on more accurate data. However, I did drop some potential relevant factors, so if anything it may be a slight overestimate.

The average Church size is approximately 186 attenders. Your average Church is 60/40 women to men as we mentioned before. The women tend to be disproportionately older or families with children. Total 18-29 women in the US who regularly attend Church make up 16.1% of the women population (25,332,752/(156,964,212)). I won’t factor in drop out rates among young people, even though it may be up to 33%. Hence, we get:

Unfortunately, there is room for gloom. But don’t lose hope. Advice in the conclusion.

Statistics based on these criteria:

The last 5 statistics are probably slight overestimates. More conservative Churches may have slightly more. More liberal Churches will probably have less. Larger congregation have a tendency to be more liberal; hence, it is probably less than 160 women per 10,000 members.

That said there are good indicators for who the attractive Christian virgins are. They wear feminine clothing, have long hair, have an innocent look, have strong masculine fathers, value family and marriage, love children, don’t have tattoos, don’t like alcohol, and other such traits.

Of course, most of the men are probably going after the 12% in each Church, so you need to learn how to be a strong, confident masculine leader if your goal is one of those women.

My Church is smaller than the average congregation. I did not find my girl in my current Church. She was 23 and a virgin when I found her, so that lends credence to the 20-24 range as well.