I was looking over doom and gloom and the amount of attractive Christian virgins and I got a bit sidetracked onto the quantification of obesity and its effect on marriage rates for obese persons.

One woman did her thesis and found:

The book obesity among poor americans found that:

A French cohort showed that obese persons were 29% less likely to have a sexual partner within 12 months as normal weight women.

Women want to marry up. Surprise.

Based on the NIDDK table, more men are overweight but more weight are obese or extreme obese: Estimated (Age-Adjusted) Percentage of US Adults with Overweight and Obesity by Sex,  2013–2014  NHANES Data

According to Dalrock’s never married charts from the Census:

10% has been the general trend for never marrieds approximately, but the rates are going up quickly. So most of those normal weight, overweight, or obese women still got married through the early 2000s and 2010s.

From the previous doom and gloom we have these statistics on both overweight and obese. 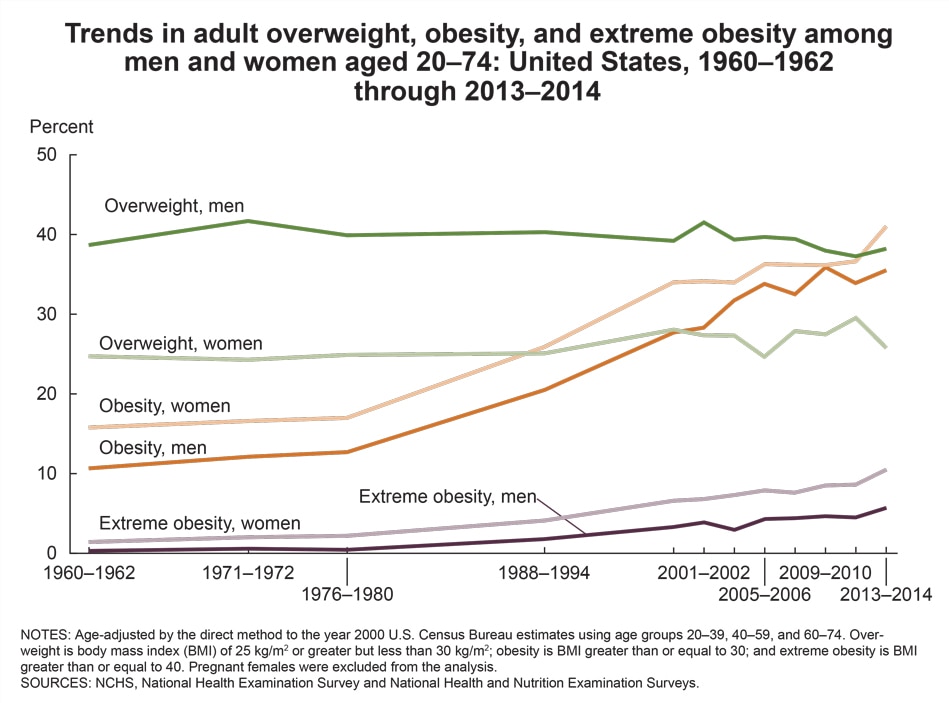 Therefore, my estimate in the last doom and gloom was dead on. In any range 20-29 year old women population, approximately 5 women are normal or underweight, 2 are overweight, and 3 are obese.

The obesity rate likely goes something like this for each age group though:

Much larger increases for the latter groups.

Average age of marriage for women is now approximately 27 years old in the US.

In other words, approximately:

If these ratios persist until all never marrieds (adjusting the ratios up for obesity as women get older), then we will have:

Basically, if you’re a woman and you want to be married you still have a high chance. Most women still get married even if they are overweight or obese, but the prospects are definitely lower. But if you are one of the “spinsters” who are getting up there in age and not married, there is a high percentage chance that you are obese.

The fear, of course, is that if the never married rates keep rising to the 25-30% range which has been estimated for some. A brief estimate in that scenario may be somewhere in the range of:

On a semi related note about spinster-ism, Amal Clooney thought she would be one once she got to 35 without getting married.

“I met George when I was 35 and starting to become quite resigned to the idea that I was going to be a spinster,” she said.”Then we met, started hiding out in my London flat and very soon it felt like no matter what happened I would never want to be with anyone else. I couldn’t sleep when we were apart, and I’m told I would display a particular grin and head tilt when reading his text messages or the letters that he would hide in my bag.

I suppose the irony is that she sorta got her “fairy tale ending” according to most, but she is extremely grateful which shows that their marriage will likely last:

“Five years later, none of that has changed,” she continued. “He is the person who has my complete admiration, and also the person whose smile makes me melt every time. My love, what I have found with you is the great love that I always hoped existed. And seeing you with our children, Ella and Alexander, is the greatest joy in my life. You fill our home with laughter and happiness  and that’s even before the children have worked out that ‘Dada’ is actually Batman.”

I wouldn’t count on that if you’re a single woman who is overweight or obese though. Make changes to your lifestyle with nutrition and exercise.

Note: Most of the percentiles are estimates unless someone has the way to do the math for the odds ratios on the population statistics.

9 Responses to Obesity and marriage rates and spinsterhood predictions