I want to take a deeper look into the Dalrock’s chart from the underlying assumptions of each of these and add in more analysis. 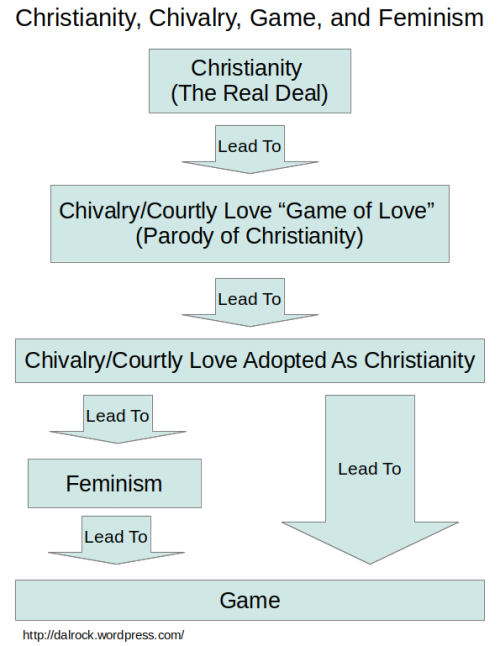 Let’s examine all of these in order.

Christianity’s biblical marital roles and responsibilities are based on God’s design.

To summarize them we have:

These are clear guidelines.

Chivalry is its own religion that has replaced Christianity for multiple tenets:

Chivalry is essentially a covert reversal of roles within the relationship, and replaces desire with works (husband must continually to win his wife) which is the antithetical to the Christian faith.

Complementarianism is chivalry except attempting to Biblically justify it.

As you can see, complementarianism is basically chivalry given another name but still disguised as Christian.

It must be stated that the original CBMW who ‘invented’ complementarianism probably had good intentions, but it has ended up as wife worship much like many different attempts throughout Christian history to ‘reform’ have failed. See Aaron Renn’s The History of the Church and Men (feminization of the Church).

Feminism is a clear offshoot of chivalry, except made more overt in nature.

There are some places where feminism has overtly diverged from Christianity such as husband headship and wife submission. But much of the same principles of chivalry remain under such as the wife’s feeling being the barometer of the health of the marriage.

Feminism simply gives the wife more tools to punish the husband if her feelings aren’t into him anymore.

Egalitarianism is feminism, except attempting to Biblically justify it.

As you can see the parallels, you should not be surprised at this conclusion.

Egalitarianism is a weird mix between chivalry and feminism and trying to Biblically justify it. The main difference between feminism and egalitarianism is that they need to at least give consideration to the Scripture (though they twist it in certain ways). However, they can’t get around some of it like no divorce but usually do it anyway in practice.

Game unfortunately is hard to discuss because there’s no agreed upon definition of what it is. However, Dalrock does a good job of defining how it works in relation to the above:

Game came about as a reaction to the practical reality created by chivalry and chivalry’s spawn feminism.  Game is a logical response to chivalry and feminism’s joint rebellion against Christian sexual morality.  Game is a reaction to the chivalrous and feminist lie that women are sexually attracted to masculine virtue, and that the way a man can seduce a woman (or otherwise please her) is to submit to her.  Game is a practical rejection of the obvious lie regarding what sexually arouses women.  Rejecting a lie is in itself virtuous, but the most learned practitioners of Game employ it to take full advantage of the feminist and (modern) Christian rejection of Christian sexual morality.

At the fundamental core, game is aimed at several different tenets of chivalry and feminism. Dalrock mentioned a couple here, but there are several.

As you can see, game rejects many of the principles of chivalry and feminism (and by extension complementarianism and egalitarianism) and supposedly agrees with Christianity on many principles which is why there are various and continued disagreements about it’s morality within the Christian community.

Personally, I wouldn’t call chivalry a parody of Christianity like Dalrock. As I described in usurpers, in ancient Canaan the goddess ‘Asherah’ is synonymous with the goddess of heaven, and another name for her is ‘Qudesh’ or ‘holiness.’ Therefore,

Chivalry and its offshoots are basically another form of goddess worship.

There is a reason why we call inversion of roles the pedestalization of women. It’s literally place her on a pedestal, like those in Biblical times would place their idols on to worship. Serving a woman and her feelings is literally synonymous with being holy, according to the cult goddess offshoots chivalry, complementarianism, feminism, and egalitarianism.

It should be no surprise that Jezebel was one of the people who made Asherah worship much more prevalent. Jezebel usurped Ahab’s authority (and he went along with it, as do complementarians and egalitarians) to do much evil in Israel. Jezebel is one of the role models for feminism as well.

This is also why the so-called divorce rates of Christians are similar to the secular culture. When the Church is only peddling versions of cult goddess marriages and twisting the Scriptures to fit their whim, it shouldn’t be a surprise that marriages are going to fail at similar rates.

I’m pretty terrible with graphics, so I’m not going to try to attempt to do a chart like Dalrock’s. Any of you who have seen my MS paint skills need not see another one.

Also, I am still of the opinion that ‘game’ is unneeded and that focus on the Bible marital roles and responsibilities with good fathering and mentoring/discipling are all that are needed. Everything is an offshoot of Christianity as God made everything.