Since this study has been making the rounds, thought it be interesting to analyze in light of some of the other posts like the pastor, worship leader, etc in regard to the M part of PSALM.

IFS blog goes over this study too.

They basically used data from some of the dating websites. They made their own selection criteria for “Indicators of Interest” (funny that they use that term that the PUAs use) basically based on half on income and half on education level.

Each member’s record contained dozens of variables, ranging from height to personality to religion. For brevity, we mention here only those that we included in our analyses. To capture how much attention each profile received, we created a composite variable called IOI (Indicators of Interest). This variable was formed by combining the number of messages, “likes,” and “winks” a member had received from others (Cronbach’s α = 0.72). To predict IOI, we used the member’s country of residence, sex, and their resource-acquisition ability. Resource-acquisition ability was measured by combining (r = .32; M = 7.75, SD = 2.48) the member’s income (1 = Very low; 7 = Very high [based on local currency]) with their level of education (1 = No High School Degree; 7 = Doctorate [e.g., MD, PhD, JD]) consistent with work suggesting education and intelligence may operate as resource-acquisition ability markers (Fletcher et al., 1999; Jonason & March, 2021).Footnote 5

Participants could score 1-7 on income and 1-7 on education. Their scores seem to be combined to get a composite score. Thus, someone who maxed out on income (7) and had only a high school education (1) could score an 8, and someone who had minimal income (1) but had a doctorate level education (7) would also score an 8 total. They then charted these to various countries that they had data from.

Pretty obvious. Women in general generate so much interest on sites because it’s more men overall, and men are messaging a ton more than women since men are generally supposed to be the initiators. 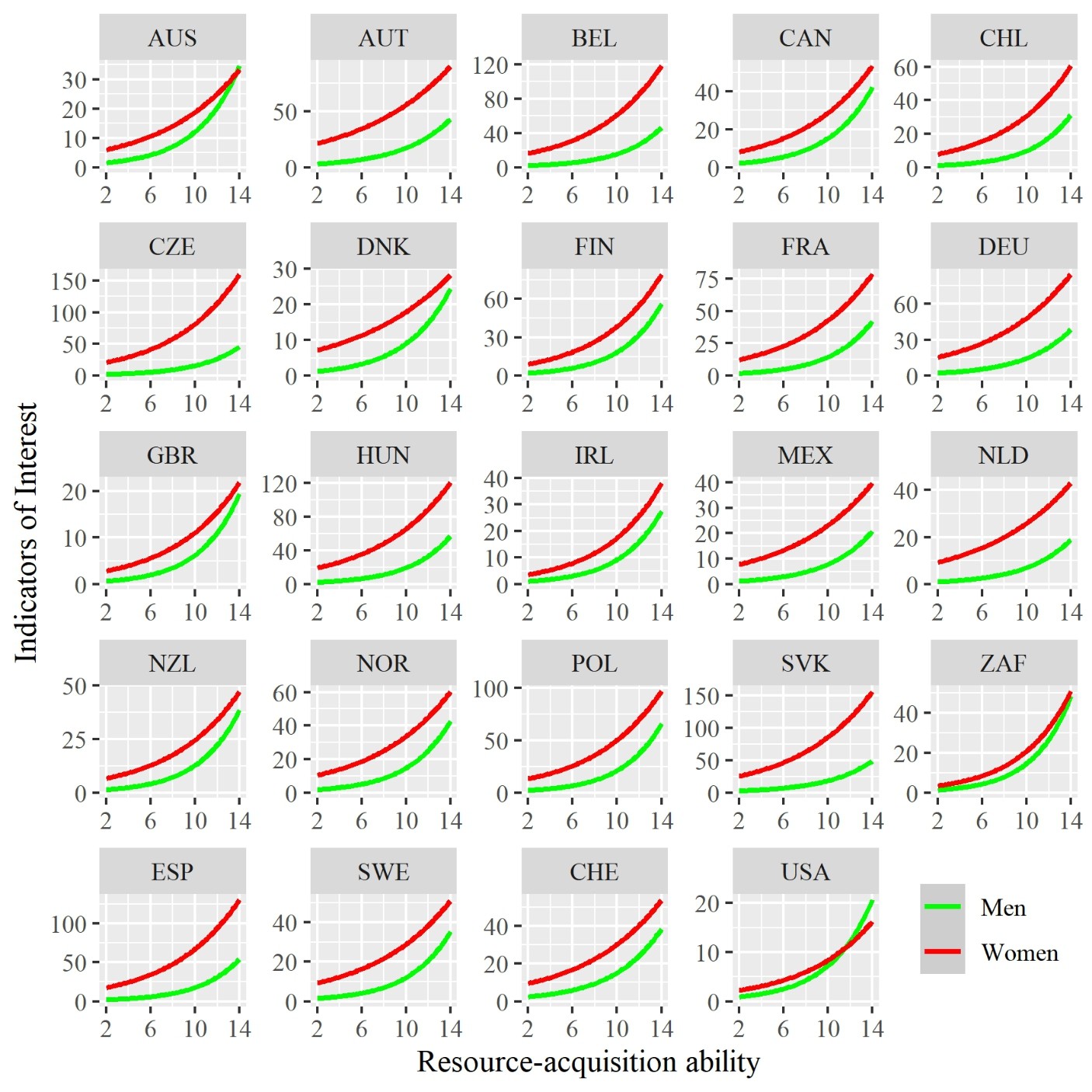 Male interest for women rises with increasing income and education level, but generally not as much as women’s interest for men (for obvious reasons). I suspect there’s more interest for women with higher income and education because that allows certain types of lifestyles and possibly less divorce risk for men (if she has her own income less likely to be divorce raped for half if she’s bringing in a lot). While women find money/provision attractive, men don’t and usually consider it some sort of plus on the side.

In particular, the US curve seems to be exceptionally exaggerated compared to other countries where if you’re earning in the 5-7 range (e.g. 4 is the middle that would mean average household income of around 67k in 2020… so probably above 80-100k+) and education in the 5-7 range (I assume this means if average is some college to college degree then it would be masters-doctorate) then your interest can actually out-pace women. It appears on the US curve that men hitting around 11-12 range start to outpace the IoIs that women get. 11.5-12 range on the 2-14 scale ironically represents approximately the top 20% of men (thus, again confirming the 20% rule).

What we typically end up with is some sort of semi-hierarchy where we have a 3 tiered type of system:

For sex mainly 1 but sometimes 2. For relationships, generally women tend to want all 3 but may settle with 1-2 in some cases. Similar with men who may have just sex with beauty, but want to marry someone with both beauty and kindness.

Attraction factors tends to dominate on dating websites, although money can and has been shown to play a modifying type of role in that women find men more attractive if they earn more. The general thing though with dating websites is it’s hard to show power, status, and athleticism without coming off as try-hard, so looks tend to dominate especially with shirt off muscle showing pictures. Money obviously can be a secondary factor too.

In general, though, the downside is that you are at a higher risk of attracting gold diggers if you display your income, so it’s generally unwise to do that on dating websites or even talking about it when dating. You want a woman to be with you aside from the money not for the money.

1 Response to Study: Education and income predict indicators of interest