Vetting, risk of divorce, and the myth of change

Posted on September 9, 2015 by Deep Strength

One of the interesting phenomena I am repeatedly encountering is the fact that some women believe that people change so much over marriage that it’s impossible to predict what happens. Let me put this myth to rest.

When I talked extensively about vetting last time there was a large amount of comments on what I look for in evaluating a potential wife part 2. Specifically, this spawned understanding statistical models and using them to vet correctly.

Now, let’s move onto the comments and analyze them.

First, lgrobins and I went back and forth in the comments about how much “vetting” helps starting from here. This quote is near the end:

What women values can change through time as well. We are fickle creatures. Liberal one decade, conservative the next, back to liberal again, as it suits our needs for what we want at any given time.

Yes, there can be many good indicators and vetting is a reasonable thing to do, but my point is it still doesn’t necessarily guarantee anything

I bring up the case again of Josh Duggar. I am sure Anna thought he was a sure thing. I mean how can you wrong with a man from that family, yet still.

“Family” does mean a decent amount, but it is simply one indicator in a very long list of things.

I recommend vetting for past sexual history and past indiscretions. Of course, he *could* have lied about it, but usually people lying under pressure like that exhibit some sort of cracking under pressure unless they are truly psychopathic.

This is why I have discussed with my girl my past of pornography usage and how far I went with some women. Although it may be a hard thing to do, to fully trust someone you have to be open to them knowing if they want even if it is difficult to talk about.

Most men and women for that matter don’t get to the mature stage of Christianity to where they can talk about their past and how they were changed. It’s not an embarrassment to have viewed pornography and had God change your life. It’s a blessing. It shows how the Spirit has worked in your life.

Unfortunately, those who are unwilling to admit the extent to which God has changed their lives are living a lie of sorts. This hidden life can give rise to the things Josh Duggar did. As Eph 5 says.. expose the things that are hidden to the light If you don’t then it’s likely someone else eventually will.

Then TPC chimes in to respond to my comment:

Anna Duggar is married. Deep Strength is not, nor even engaged based on his admittedly oblique references to his relationship status. Vetting is not a “99%” near-guarantee of anything. Humans gonna human. I cannot take seriously any arguments regarding spouse-vetting from unmarried men who aren’t priests or pastors.

Anna Duggar made the kind of choice a lot of women have made historically, which is to pick what they thought they could live with from a very short list of their real marriage options. As an actual married woman, I know that my persepective on female choices in marriage will be disregarded by the never-married men claiming to have better information in the abstract, as are the perspectives of other married women. But the reality is that most women have few choices for marriage and “vetting” in the form of long talks about abstract stuff doesn’t really give a bigger or better pool. Most men have few choices for marriage as well, but there is extensive discussion of that in many other places.

I’m going to ignore how disjointed this particular comment is. For example, I specifically said that you can vet to raise the percentage well above 90% to about 95-98% if performed correctly. Yet, TPC pulls out a 99% from nowhere. This alone is enough to make me not take the comment seriously. Only pastors and priests can spouse vet. Yet TPC gives her opinion which by her own statement makes her opinions here worthless. I’ll chalk it up to a team women rant.

However, I’m going to address these comments in regard to statistical modeling which is indeed extremely accurate in predicting divorce rates. I stand by the statements that I made.

Let’s look at one example we are all familiar with: virginity. 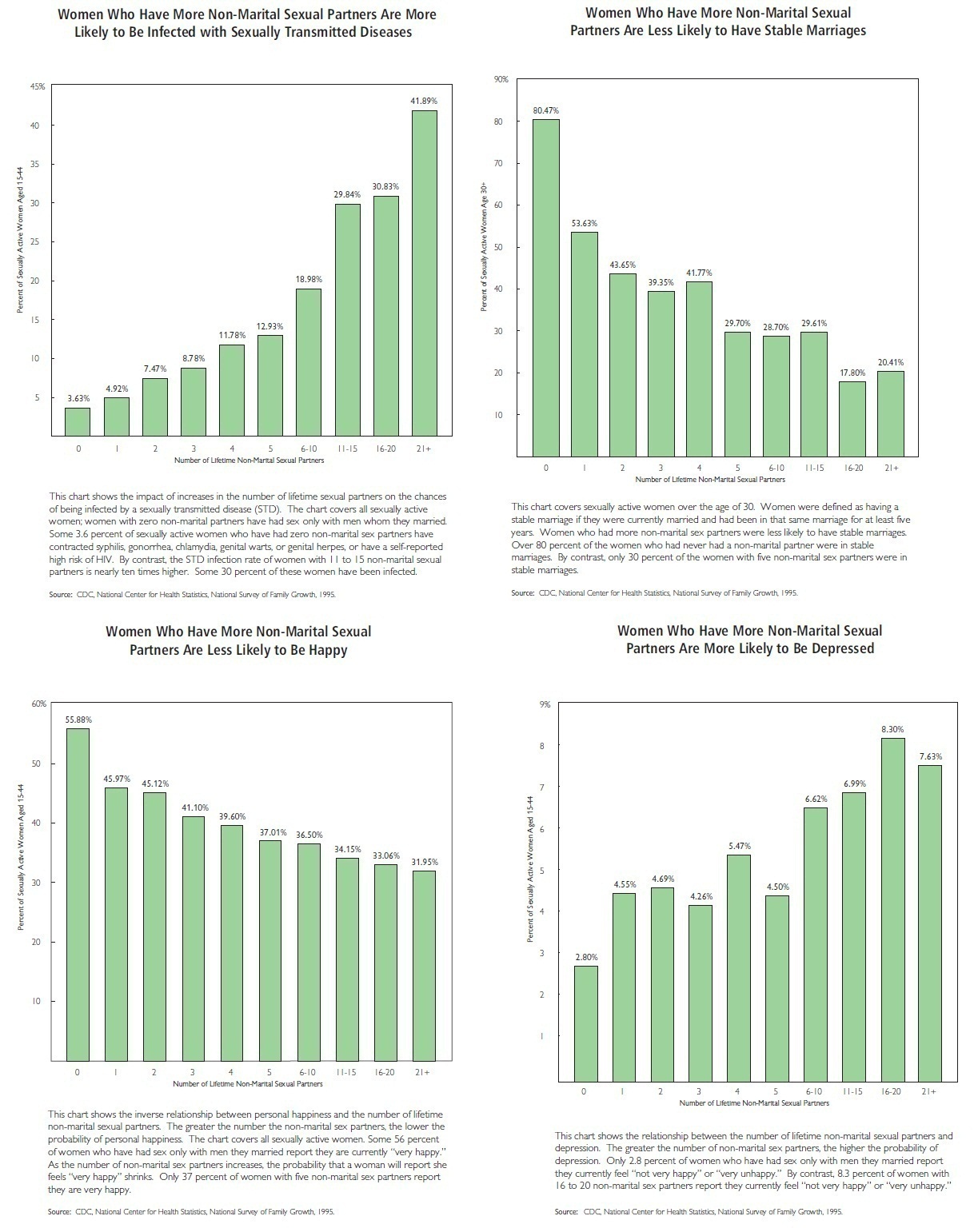 Sampling virginity across a wide spectrum of the population including the Teachman study on Social Pathologist gives us very important information about behavior in marriage based on the virginity of the wife. In particular, we see correlative trends on:

Now, these are not all of the stats you can pull out on virgins. However, the are simply some. And, as the next chart indicates, the findings for the population regarding virginity and stable marriages are replicated across various studies.

This alone shows the female virginity is important for marriages. God knew what He was talking about in Deuteronomy 22.

Other indicators based on statistical modeling

Aside from virginity, are other indicators of stable marriages based on statistical modeling. I’m not going to pull out charts for all of these, but you can check out some of the others for yourself through google. For example, stable marriages are more likely to be formed across:

Those committed to their faith or no faith are stronger in marriages than those who are lukewarm.

Education is a predictor of stable marriages. Cane and the commenters discussed potential reasons why.

A father and a mother provide the most stable marriage, which is also a predictor of divorce. Single mothers being a big offender.

Yes, shotgun marriages are worse than wedlock marriages but better than having children out of wedlock then getting married.

All of the relative risk ratios for the following are discussed in Free Northerner’s post on Sexonomics: odds of divorce. I took out the ones already discussed.

Some other indicators from divorce probability.

All of these are different indicators of increase probability for separation or divorce.

There are some calculators aside from Free Northerner’s post. FN mentions divorce probability. Just 4 Guys had one up a while ago.

J4G calculates the relative risk ratio of separation at 10 years. If the woman is:

Then the relative risk of separation at 10 years is 2%.

Obviously, J4G does not take into account many of the other myriad of risk factors above including ethnicity, importance of religion, income, income total, employment status, interracial marriages, country, conflict solving, alcohol use, drug use, mental illness, age difference, forced premarital sex, and some of the other factors.

It is likely that the relative risk can be reduced even further if other factors are applied.

I stand by my statements that vetting will reduce the risk of divorce from 50/50 to at least 90% if not 95-98%. Perhaps even 99%+ like TPC denies if you can factor in all of the ones that J4G and DP missed including attitudes about the importance of God and family in relation to life. In fact, virginity does most of the leg work reducing the risk of divorce already up to 80-85% depending on the study. This is why chastity is so important and why it made my list.

One of the quotes I’ve heard from Andy Stanley on why statistics matter is excellent (although, unfortunately, he believes heretical “submit to one another in Christ” for marriages). Paraphrased:

It is foolish to ignore statistics. […] You are unique. God created you to be unique. But your experiences are not unique.

Experiences are not unique. We are all humans and engage in relationships. This gives statistics power as exemplary warning signs that can be used to analyze what a stable marriage looks like compared to an unstable one based on current and past behavior. They are accurate predictors that those unmarried can use to look for a potential spouse including the direct vetting like I have talked about.

Obviously, people change during marriage. This doesn’t mean that there is a sudden massive increase in divorce probability as people change and get older. I admit that you can’t vet to 0% probability of divorce. Even in the list above in the last section there is a 2% chance that there will be separation at 10 years. Maybe you fell into the 2% risk of separation or divorce. You one of the 2 out of 100. That sucks. But that doesn’t discount that 98/100 of the other men still have stable marriages. Women may be fickle, but certain types of women are not that fickle that they would end up divorcing in droves after strong vetting.

Therefore, it should be abundantly clear that vetting, especially statistically, does have a very strong impact on finding a quality prospect for marriage. Reduction in relative risk of divorce from about 50/50 to < 5% maybe even to < 1- 2% is a very strong indicator that it works. It is such a strong reduction such that most informed men would never take a 50/50 willingly but would take the a < 2-5% chance. See: Jesus’ analogy of discipleship about counting the cost.

Now the question for my readers:

The two that I would immediately think of are special snowflake syndrome and team women. In particular, special snowflake syndrome and team women don’t like that their behavior can be generalized in predictable patterns by statistical analysis. However, even if those are true they might not be the only or main reason(s). Not all women are like that (NAWALT) not withstanding.

If you have any thoughts on that question I want to hear them. Also, commentary on the post is appreciated if you agree or disagree.

60 Responses to Vetting, risk of divorce, and the myth of change